How much is traditional reality-data storage costing your project? 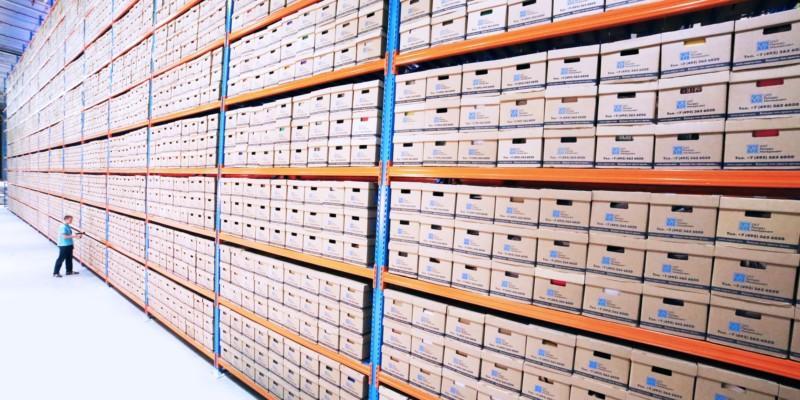 Over the past decade, a growing number of construction projects have started using drones, 360° cameras, and laser scanners to capture the job site. That means they have more reality data than ever before.

This prevents the project from using the data to its full potential—and it can cost a lot of time and money.

But how much does it cost?

A report that offers answers

This topic is covered in a new report from the United States Institution of Building Documentation (USIBD), a not-for-profit standards organization. Before we get to the numbers, here’s some useful background about the report.

The USIBD Cornerstone Report asked 149 companies in the United States AEC industry about how they store and distribute their reality data, specifically their laser scans. The list included engineering firms, general contractors, sub-contractors, scanning and modeling service providers, consultants, and more. These companies work on projects of all sizes, from small construction works to megaprojects.

Though the report focuses on US companies and laser scanning data, it represents the kinds of companies and stakeholders that you would see on a construction project anywhere in the world.

The biggest costs of traditional storage and distribution

The report shows that most AEC companies are storing their data on network servers, personal hard drives, or cloud services like Google Drive. And they are sharing their data by uploading it to servers, or simply mailing drives.

Most companies in the report say that storing and sharing their data this way causes big problems. Here are three of the most costly problems:

And here’s where it gets interesting. The companies could say which problems were the most costly—but more than half of these companies couldn’t say how much money or time they lost while solving these problems. 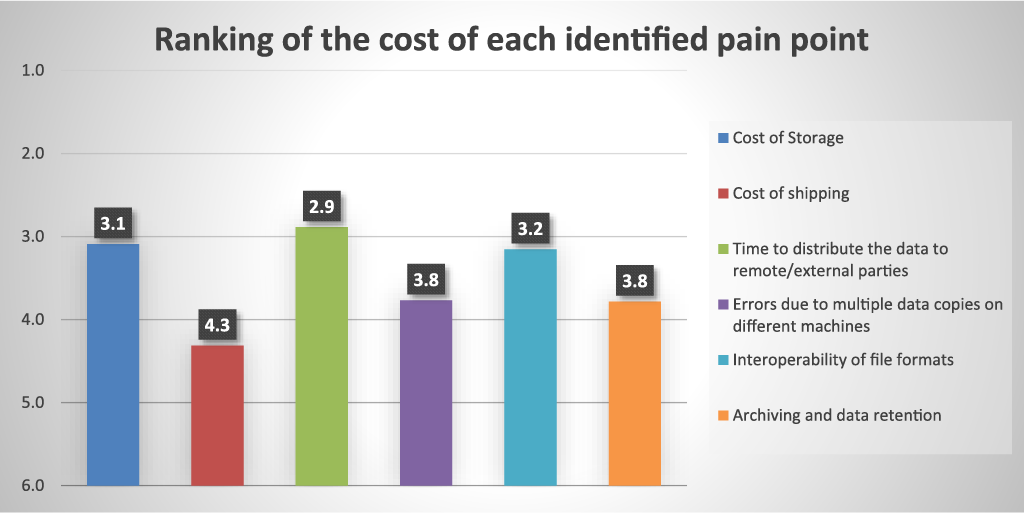 Lucky for us, USIBD was able to make estimates for most of these categories based on other information gathered in the survey.

Cost of data storage for a single project

Most of the companies couldn’t say how much they spent on storage, or estimated that they spent less than $100 per project.

The USIBD was able to determine that this estimate is extremely low. 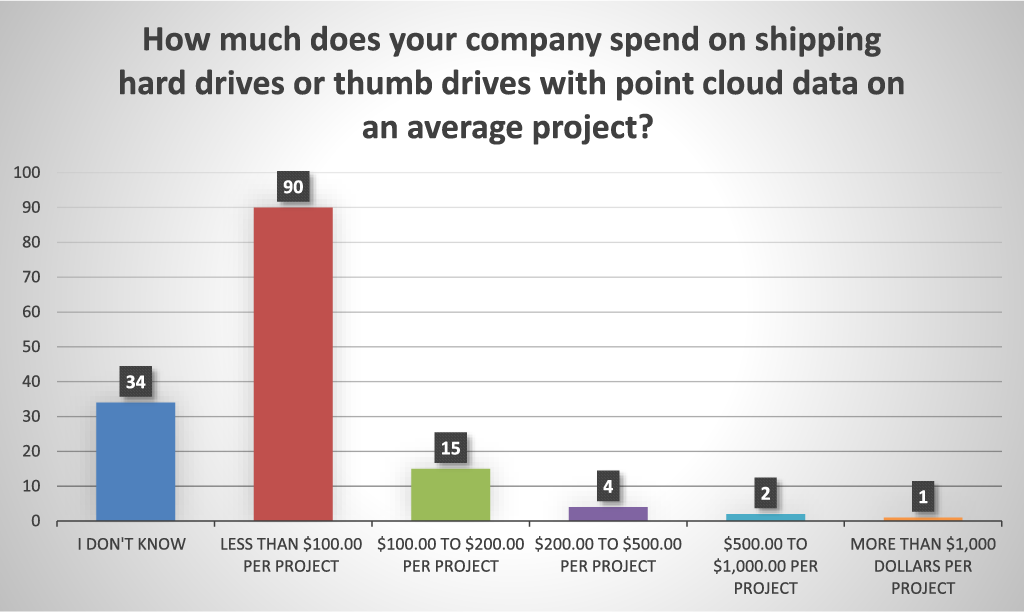 To find the real price, USIBD looked at the average amount of data stored per project, and then the price of the hard drives and network servers required to store that data. As a result, they were able to estimate that companies are actually spending between $500-$5000 per project just to store their data. And this number doesn’t include management of the data, or sharing functionality.

According to most companies surveyed, the big cost of sharing data is work hours.

Each time their project team shares data using drives or network storage, the project loses between a few hours and a few days of valuable work hours. 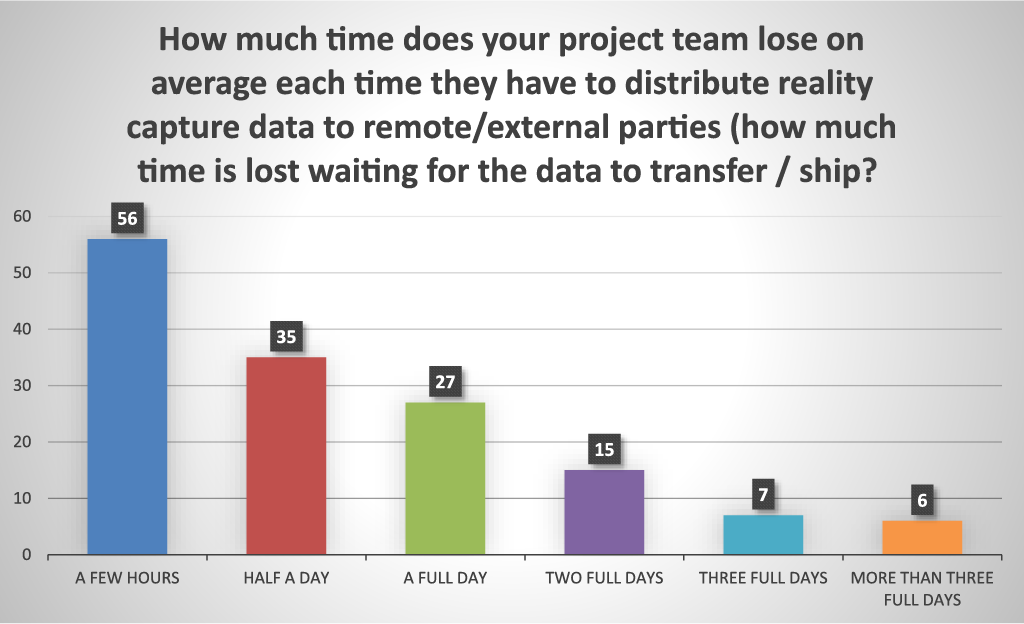 Again, the USIBD says this estimate is probably very low. The data shows that companies didn’t account for shipping time or the amount of time an external stakeholder would spend downloading the file. That means the true amount of lost time is likely twice what the companies estimated—meaning their project teams may lose between a day and a week each time they share data with an external stakeholder.

It’s also important to note that project teams who spend time sharing data are also losing time they could be spending on other tasks. That causes delays.

These are very costly problems for any project.

Cost of errors due to multiple data copies on different machines

When companies store their reality files on personal drives, or in a maze of folders on a server, that means there are multiple versions of each file. That means an employee needs to sort through their files to find the data they need. 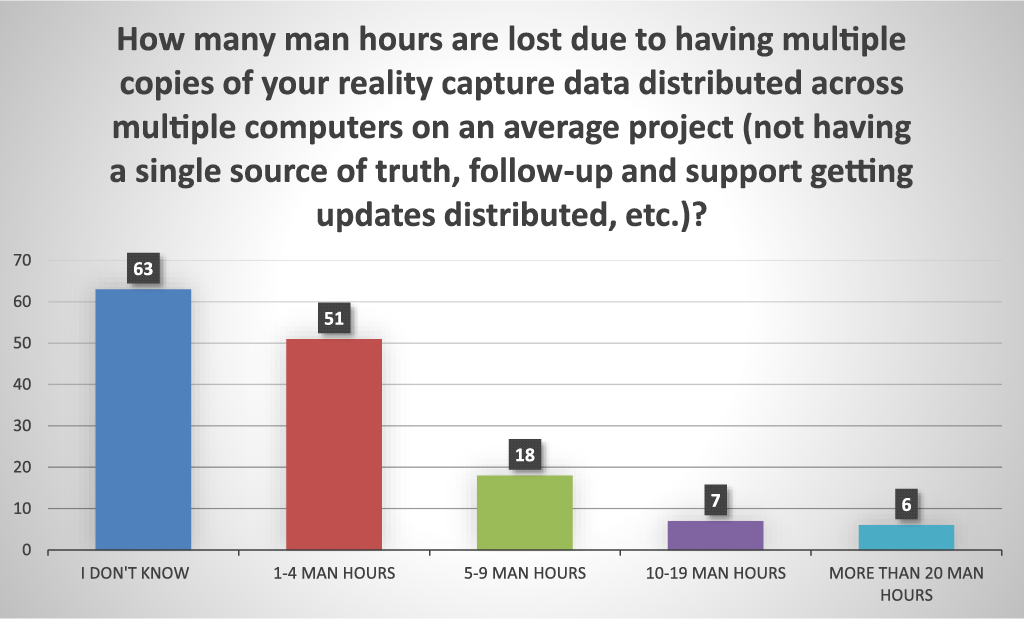 The USIBD estimates that a company spends about $30-$450 each time an employee needs to sort through these multiple files.

However, it is important to remember that this doesn’t account for the time that employee could have spent working on another task—and billing the client for that work. That means there’s another cost involved: the loss of billable hours.

An employee who bills at $250 an hour and spends 20 hours on finding the right data can cost the project up to $5000.

What’s the total cost of traditional data storage and distribution?

The report’s data leads to a number of conclusions. First, most AEC companies don’t know how much time and money they lose when they use traditional data storage and sharing methods. Second, it is clear from the USIBD’s estimates that the true cost is likely to be a lot higher than most companies realize.

The good news is that a tool like Pointscene is designed to solve the problems we’ve explored above. Check in with our salesperson to find out how our platform can make it easier and less expensive to store your data, manage it, and share it. The platform also includes a variety of tools that make it much easier to work with a variety of data sets—none of which would be possible using traditional methods.

See the free USIBD report for more details on the data, including charts showing the problems associated with archiving, metadata, and more.