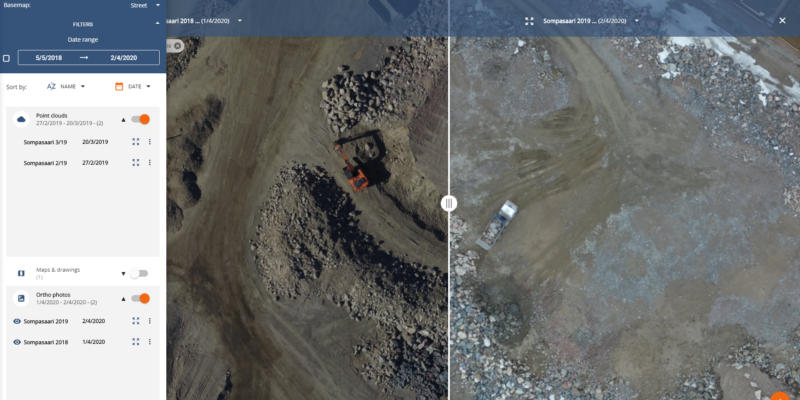 Surprises are inevitable on a big infrastructure construction project. As soon you start digging the hole, you’re likely to see unexpected formations or other problems in the soil or bedrock, or likely find that the utilities aren’t laid out as recorded. Now the designs from several years ago need to be changed.

This is where the problem really starts: To update any kind of design or a plan, a project stakeholder needs full situational awareness—in the form of a fresh, geo-referenced spatial data set that reflects site conditions as they are right now, with all historical changes accounted for. And that kind of full situational picture just isn’t possible for most stakeholders, meaning that surprises tend to mean rework, missed schedules, and exceeded budgets.

Pointscene is working to change this. The SaaS solution is designed to take data generated by any reality-capture methodology—including the big ones like drone photogrammetry, 360° imagery, and laser scanning—and make it easily available for any stakeholders who needs it. Pointscene makes it possible to open any data set in a web browser interface for quick viewing, or even access the data directly in your software application.

With this functionality, Pointscene aims to give stakeholders full situational awareness of their sites, enabling them to react quickly to surprises and keep budgets and schedules in check.

Today’s professional can document on-site changes a variety of reality capture hardware, and virtually all of these tools come with some kind of software platform that enables sharing data. So why is it a challenge to get data to every stakeholder who needs it, when they need it?

As Pointscene CEO Lauri Hartikainen explains, the biggest problem is that every data set needs to be processed differently. “There is a serious lack of well-implemented standards and interoperability,” he says. “This is definitely true for 360° images, but for point clouds and photogrammetry data as well. There are still so many tools for generating data and so many ways of providing data. There are different formats and a huge amount of different dialects within the formats. Even if you use an open format, that won’t necessarily be the same for everyone. This makes it difficult to interchange data between formats and use data in different applications.”

Add to that the complexity of region-specific standards: Hartikainen notes, for example, that each Scandinavian country has specific format requirements for construction survey solutions that can slow down the data sharing process even further.

This lack of interoperability has a cascade effect. Even when reality data is captured regularly on the job site for change documentation, the technical requirements of changing the data between all the various formats prohibit sharing. This means most end users never convert the data to load it in their software application, and a lot of highly valuable spatial information goes unused.

“We want to make sure that all data collected, by any methodology, can be used in all end-user solutions”

Getting Data Where it Needs to Be

Pointscene solves this challenge by ensuring that data is in the right form for any application. “We want to make sure that all data collected, by any methodology, can be used in all end-user solutions,” says Hartikainen. “We make all the minor adjustments that might be needed so the data works in a wide variety of collaboration applications like Trimble Connect and Infrakit, or CAD solutions like Autocad, Microstation and Trimble Novapoint.”

Here’s how it works. Pointscene ingests data from all the different sources and data processing applications that are in use on the project. Next it transforms that data in two different ways: First, it generates a streaming version of the data that can be viewed on the web or downloaded using the Pointscene application. Second, it uses specially designed web services to pass the data to a wide variety of CAD, GIS, and BIM software applications—enabling users to open that data directly inside their software without needing to extract or download it first.

“Hopefully,” says Hartikainen, “that changes the data into a more intelligent form so that it will actually provide additional insights and situational awareness to stakeholders on the project.”

“Reality capture will truly provide additional insights and situational awareness to stakeholders on the project.”

He says if you have been “doing your homework” and collecting data regularly, “Pointscene will have the supporting documentation or reality model you need to react to any inevitable surprises. You can make your decision quite rapidly without ordering additional surveys, or making major adjustments to the design. You can simply bring that data into the appropriate software and make annotations, or adjust your work as needed.”

By capturing an as-built point cloud data set as little as every few weeks, and pulling those data sets into end-user solutions as needed, Hartikainen says, projects will see immediate return on investment. For example, site managers and engineers can use the data to eliminate non-essential site visits and quickly start saving hours per week. Projects can shorten their monthly meetings significantly by ensuring that every stakeholder present has the data they need to make decisions. Engineers can keep track of earthworks volume by making quick comparisons between the current data set and the previous one.

Pointscene technology can also have legal use cases. “One of our customers proved that their schedule overage was caused by a neighboring work site, which had exceeded their physical boundaries,” Hartikainen said. “Using the regularly collected drone data sets along with the designs and project boundary data, they were able to offer immediate proof to justify their delays.”

Today, Pointscene already acts as a data pipeline, getting the reality data from the field to the office, office to the field, or between colleagues with the smallest amount of friction possible. But Hartikainen wants to turn Pointscene into a tool for getting actionable information from your data with the same level of ease.

“The upcoming status is that we’re planning to provide advanced API tooling,” he says. “At an organizational level, you will be able to integrate data from these different reality capture methods into your workflows. That will mean API automation that you could use to run your own pipelines, or algorithms, on centrally stored and programmatically accessed data. For example, let’s say you have a classification routine you want to run on a point cloud—you could run it using our API without needing to take care of all the server-side stuff yourself.”

With the API, Hartikainen says, Pointscene is “giving users the possibility of harnessing the data for a specific purpose, while still handling it in a centralized manner.”

He believes this will enable a broad range of future applications for a project’s reality capture data. “In the future, Pointscene will help its customers to run similar real-time analytics like the Teslas, Ubers, etc. are doing—but we’ll be doing it on each organization’s dashboard. You’ll collect your data, do your analysis, see what has changed, determine whether it’s all in the correct location or not, and combine those into a human ingestible form.”

“It’s going to get simpler and simpler to run this kind of analysis,” he concludes.  “And get better information about the current state of your project in comparison to the designs, or in comparison to a previous point in time.”

“There’s an enormous amount of things you can do when you centralize all the data in one place but still decentralize the access.”

We’d be happy to show you how construction data management works in practice! Request a demo and we’ll be in touch!